Here's another photograph from my trip to Family Camp at ECCO. They have this great pond on site that is just SWARMING with dragonflies. I've never seen so many concentrated in one area. I've never seen so many different species in one area either. Off the top of my head, I can think of nine species of dragonfly (not including damselflies) that make their appearance. This one, the Widow Skimmer, is by far the most common. In fact, there are more widow skimmers here than all the rest of the species combined.

Widow skimmers, as the name would imply, belong to the "Skimmer" family of dragonflies (Libellulidae) which are medium-sized, tend to have fleshy bodies (rather than hard exoskeletons) and are commonly seen hanging out near still waters. They also tend to land quite often, which I appreciate since they're darned-near impossible to photograph in flight.

As you might imagine, dragonflies are a little skittish. Not that they all flee and hide from me when I appear, just that they keep their distance. When they land, it's rare that I can get very close before they take off again. The best method for me is to sit myself down around some grasses and just wait for them to land nearby. It takes patience.

It also takes the right lens. For this shot, I used a Canon 100mm f/2.8 Macro lens. This lens is great for insect photography. Its moderate length makes is so I don't have to get RIGHT next to the insect, which dragonflies don't tolerate. f/2.8 means that it's a "fast" lens so the aperture opens up wide enough for me to take a fast shutter-speed shot. Also, f/2.8 means that the background of the shot (that which is not in focus) is very much blurred to easily bring out the subject. Oh yeah, and Macro means that I can get as close as I dare. A normal 100mm lens would allow me to get no closer than a few feet away from my subject. With this macro lens, I can get within six inches. Also, this is not a Zoom lens, it's "fixed" at 100mm. While that might be a slight disadvantage in terms of versatility, fixed lenses are much sharper than zoom lenses. Besides, none of Canon's macro lenses are zoom.

Speaking of zoom lenses, if anyone wants to do a little Christmas shopping, I wouldn't mind one of these. 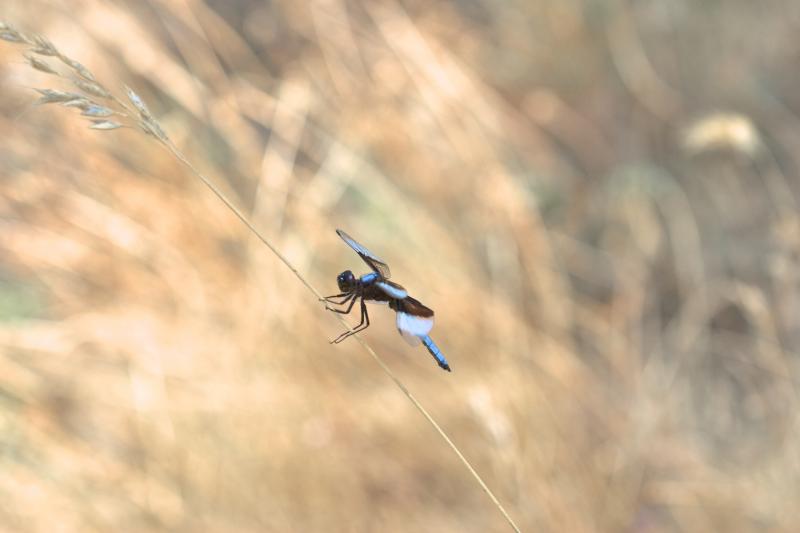