Spot the butterfly yet?

This guy was one of a kaleidoscope of Golden Hairstreak butterflies that I watched erupt from the ground, fly around for a bit and then apparently disappear as they land. The ground was covered in similar-colored leaves so that you really couldn't tell what was a leaf and what was a butterfly... which is, of course, the point if you happen to be a butterfly with an evolutionary will to survive. There's that classic history about Peppered Moths in England that shows evolution in motion. It's fantastically interesting that some species of butterfly are so colorfully bright, with no regard to how yummy they would look to a passing bird, while others are so destined to hide. The Monarch butterfly answered that by eating milkweed as a caterpillar and becoming poisonous. The Viceroy butterfly solved it by looking like just a Monarch.

One of my favorite subjects are camouflaged animals. I'll post a few more soon. Long after I shot several such photos, I found a coffee-table book of photography by Art Wolfe. It's called Vanishing Act, and it's all sorts of animals camouflaged in their natural habitats. It was so wonderful I had to buy it despite its $50 price tag.

This photo was taken several years ago as I walked upstream at Luis Creek. Where the rocks are huge and water abundant, it's very nice to have a compact (and relatively inexpensive) camera to carry along.

Okay, so I cheated a little bit with this photo. Call it Photoshop Magic, if you will. This is actually a composite of two photos that I took one right after the other. One of them had the leaves in focus, and the other had the butterfly in focus. A little cutting, pasting, and blending, and you probably wouldn't have been able to tell if I hadn't pointed it out, right? 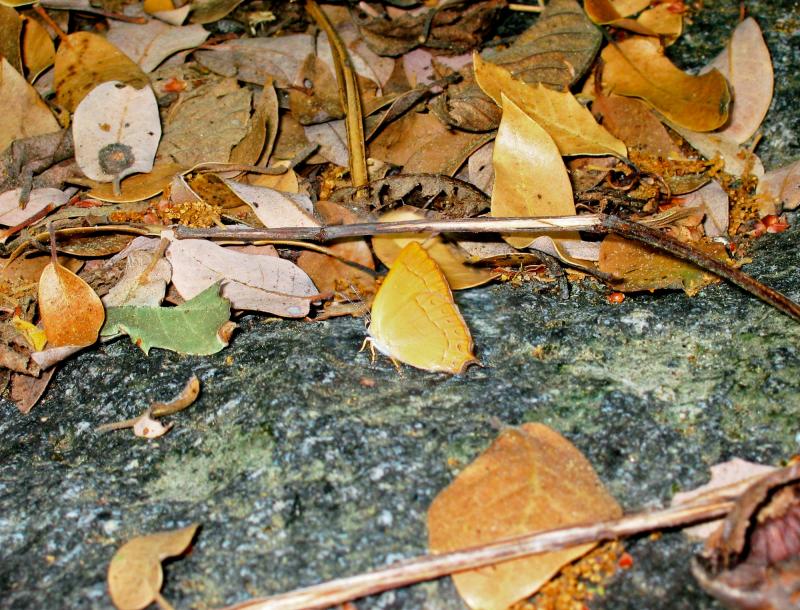