Day 4: We arrived on Caye Caulker the night before and first order of business today was some scuba diving. I had reserved a spot on the "Barrier Reef" dive trip from Belize Diving Services. I mostly picked them because they offered Nitrox, but it turns out that they had the best boat on the island, hands down. The boat was only about 8 months old and it was a dive boat through and through.

There were several groups on this trip apart from mine: a French family who were all getting their open-water certification, an instructor with his student getting an advanced certification, and a small group of folks who we picked up from a catamaran anchored out by some other island. 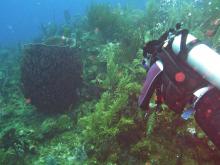 The first dive was Long Caye Wall. The coral was amazing. Never seen anything like it. The fish were admittedly less abundant than I had expected. Hawaii, for comparison sake, has fish all over the place. Not so here, though the fish I did see were all spectacular. As soon as we finished our decent, one of the other dive shop employees speared a particularly glorious lionfish. The lionfish were some of the most remarkable fish we saw, and this guy was spearing them at every turn. I was a little appalled. He didn't even seem to be keeping them as he had no bag.

We swam along to the wall, which sloped down at maybe 60 degrees. We descended a little further and I found myself about 20 feet above the instructor and student who appeared to be placing items into a small, rather colorful box. I snapped a photo of them and then spotted the guy with the spear nearby signaling to me rather frantically. He indicated that I should consult my console which relayed the important fact that I was at 95 feet of water. That's 15 feet deeper than I was supposed to be. Oops. I ascended (appropriately slowly) to the planned maximum depth and located my group. This was relatively easy since the visibility was in the 80-100' range and my guide was signalling to me from above no less frantically.

When everybody was back on board, I tracked down the instructor and student to inquire what they were doing down there. The colorful toy they were "playing" with was, in fact, exactly that. It was that toddler's toy: a box shaped like a house, with different shaped blocks in a variety of colors. The blue cylinder, red rectangle, green triangle, yellow cross, etc. can only fit in through its respectively shaped window on the house. The idea is that you time yourself on the surface to see how long it takes you to get all the blocks into the house. Then you time yourself doing that task progressively deeper under water to see how you're affected by nitrogen narcosis. (Hence the reason why I wasn't supposed to be down there.)

I also tracked down the lionfish killer who explained that lionfish are an invasive species in these parts. They're a Pacific fish and they wreck havoc on the reefs in the Carribbean. 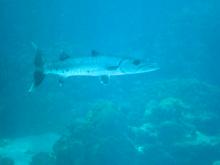 For our surface interval, we moored along some shallow reefs and we were given the opportunity to snorkel. I welcomed it, but I was surprised that only one other was interested. On this snorkel, I saw barracuda. Lots of them. Some were hovering close to the surface like at the beginning of Finding Nemo, and others were hanging around some isolated clumps of coral surrounded by sand. They sure look menacing. They were, at most, about four feet long and as big around as a softball. With that mouth full of big, sharp, pointy teeth, I didn't go out of my way to chase them down. I got as close as I dared, close enough to snap some photos, and let them go about their business. In truth, they're relatively harmless; nonetheless, I didn't want to try their patience.

Our surface interval was a little longer than planned, probably thanks to my deep-water bungle. 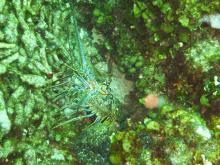 The second dive was at The Sand Trap, which was an apt name. There were small clumps of reef distributed across a large swath of sand, like driftwood on a beach. We eventually came to the reef proper which manifested itself as long fingers stretching out on the sand. We could follow the trench and have walls of coral reef on both sides of us. The most exciting animal we came across was a spiny lobster poking his antenna out of his little hiding place. He seemed pretty unconcerned about us. What struck me is the array of colors on the lobster. As I remember seeing them out of the water, spiny lobsters are a dark red, but this one appeared to be covered with blues, yellows, purples, and reds. I'll have to review my photos to see if I was imagining things.

As I was ascending, I noticed a strange texture on the surface of the water. When I finally broke the surface, I noticed it was raining. Yup, that would do it.

Back on the boat, we were unloading our gear, and my dive buddy, David, who was visiting from England, reached into his soggy swim shorts and pulled out... his passport. Bummer! It was soaked. The pages were intact, but many of the stamps were pretty runny. David freaked out. One of our hosts advised him to take it back to his room, gently dip it into fresh water and hang it to dry. It'll be fine, but I understand the value one places in a passport when traveling abroad. There were several times throughout this trip where I didn't feel my passport in my pocket at first, or needed to double-check that it was still in my backpack. Not a good feeling. 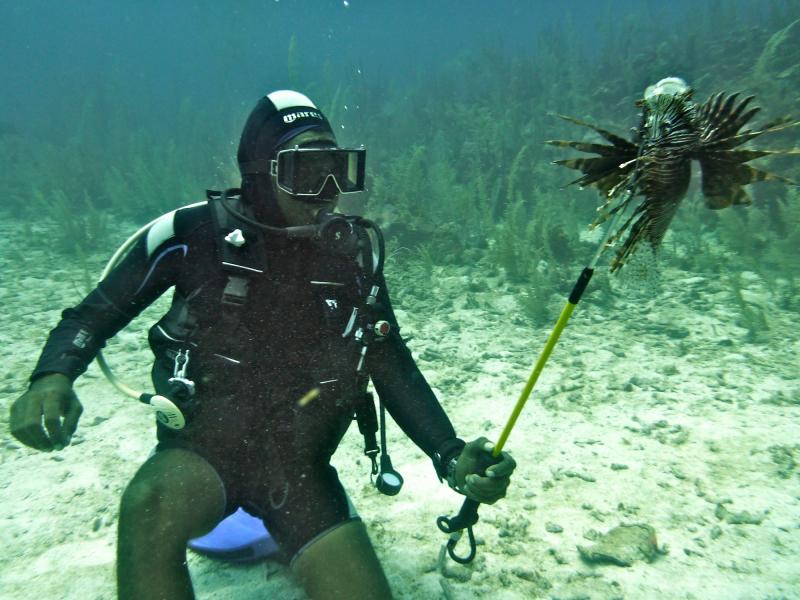 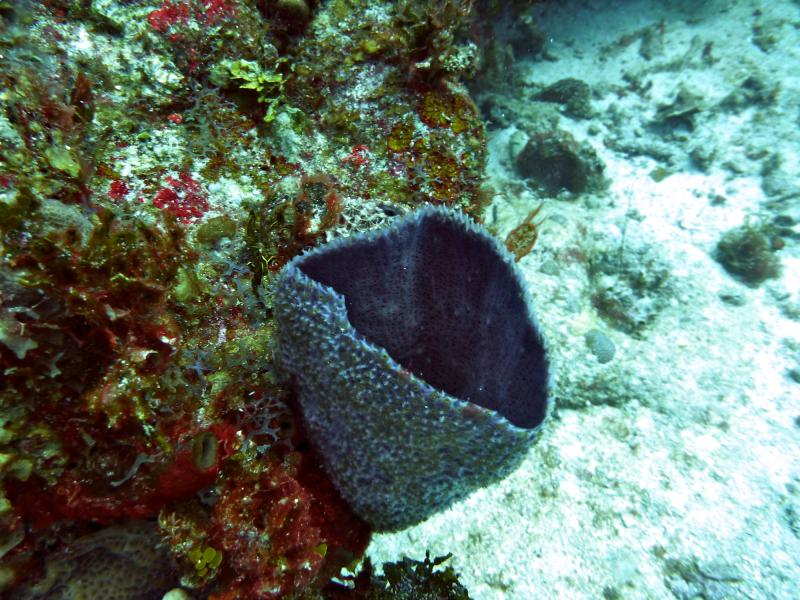 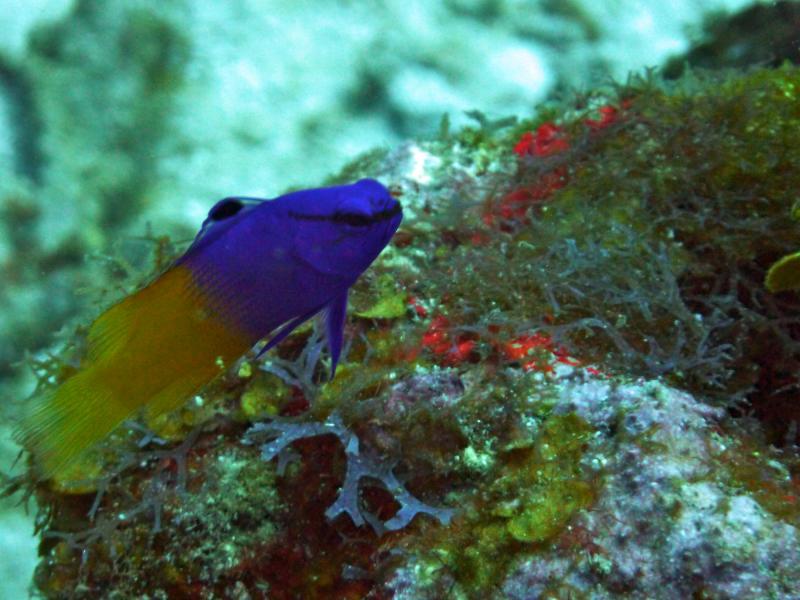 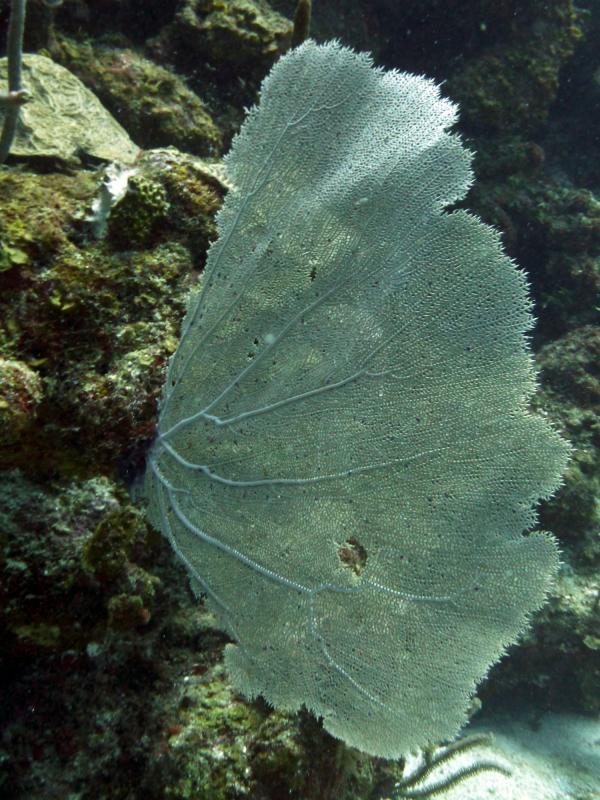 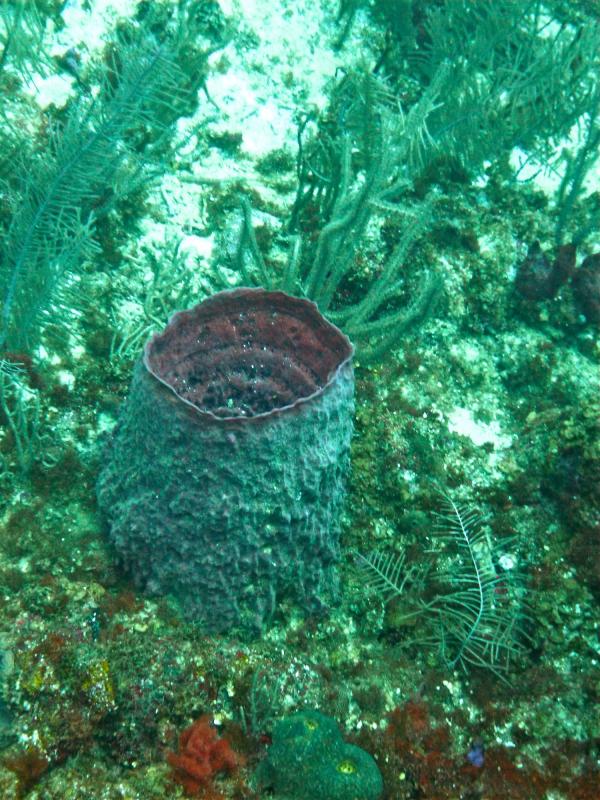 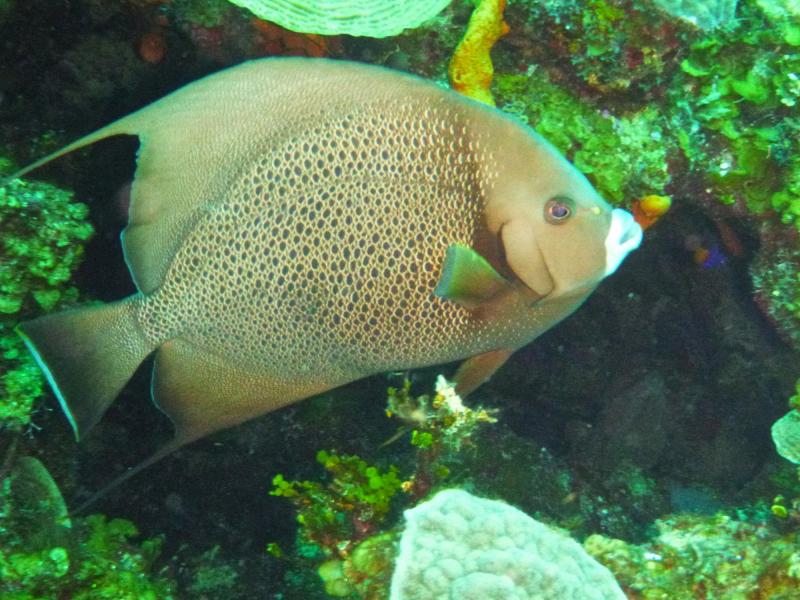 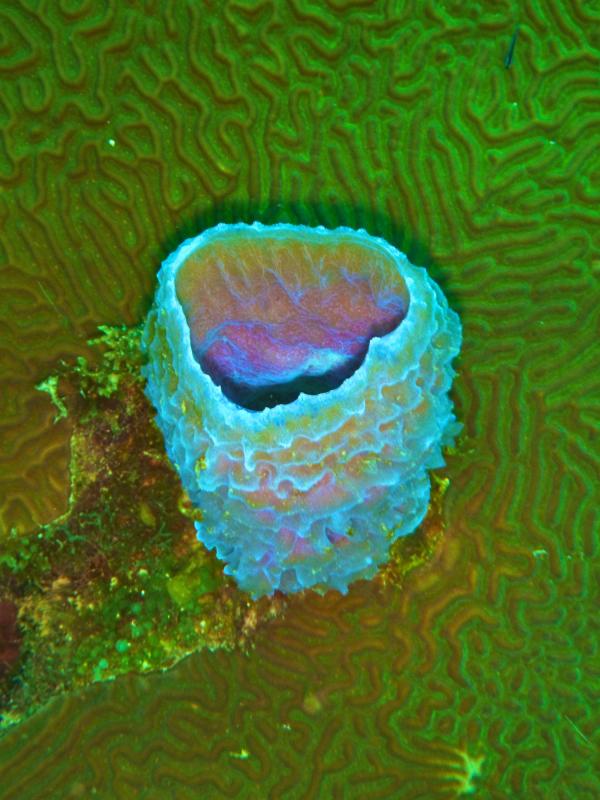 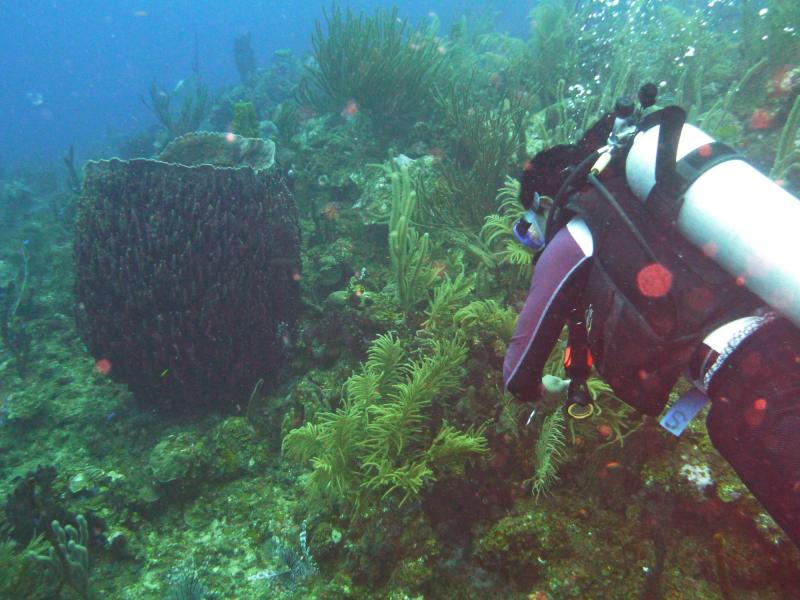 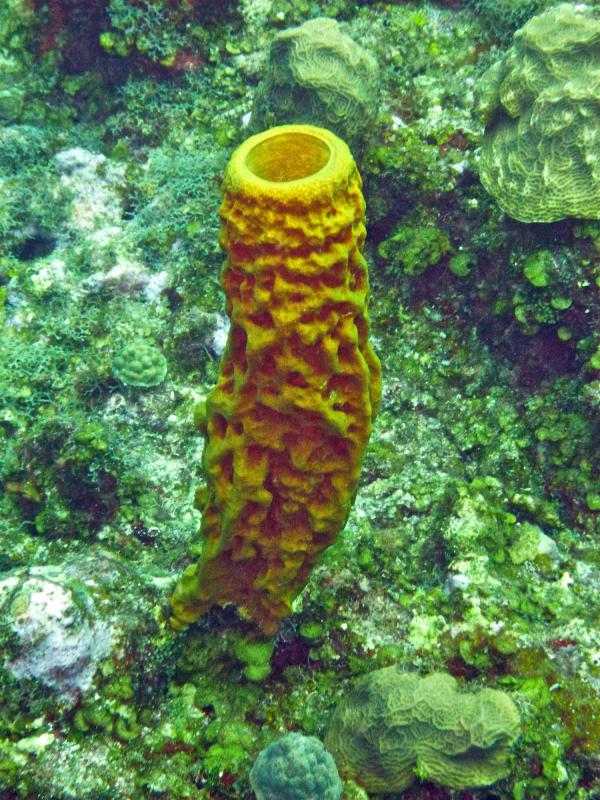 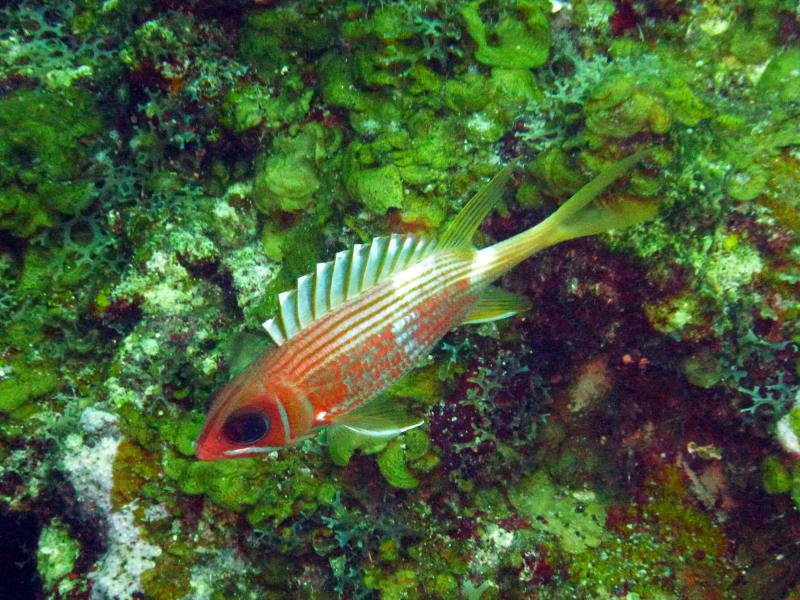 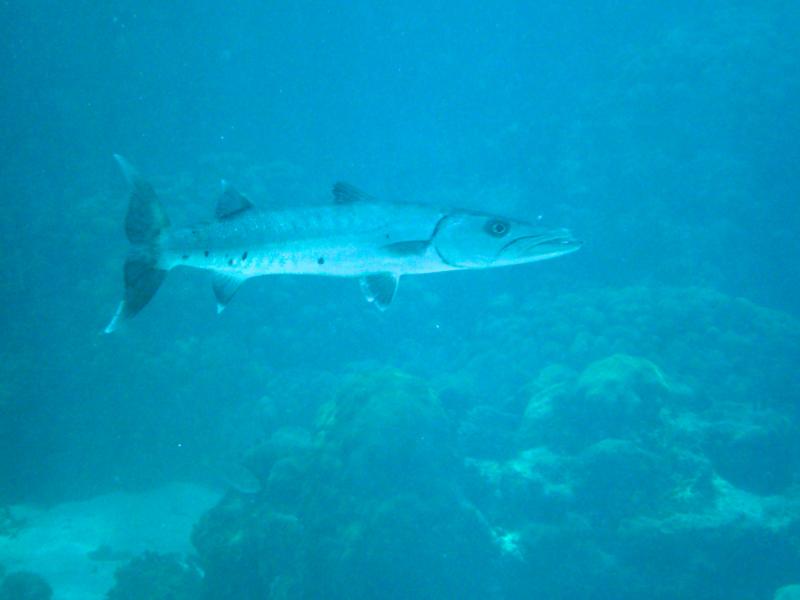 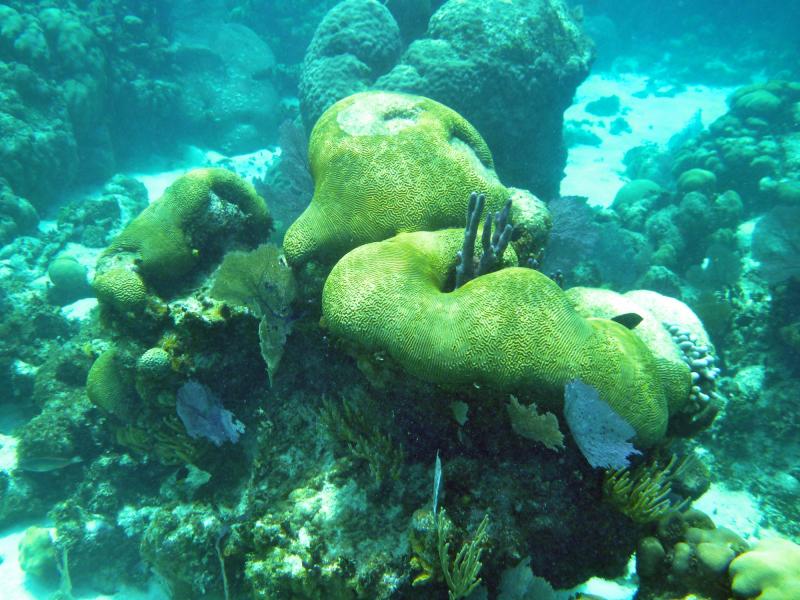 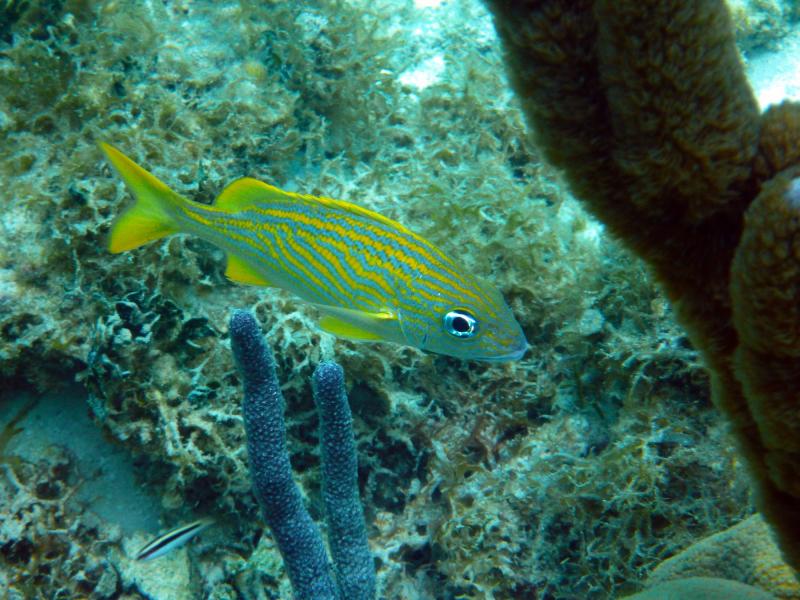 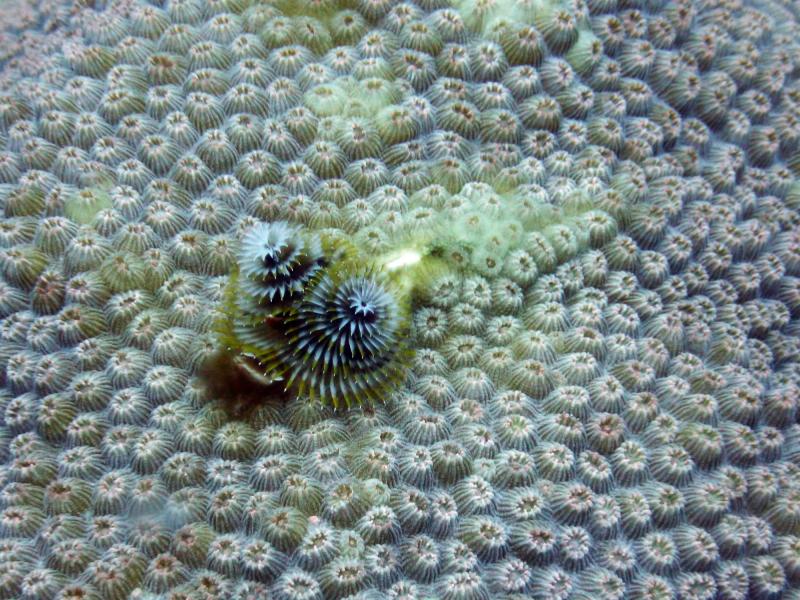 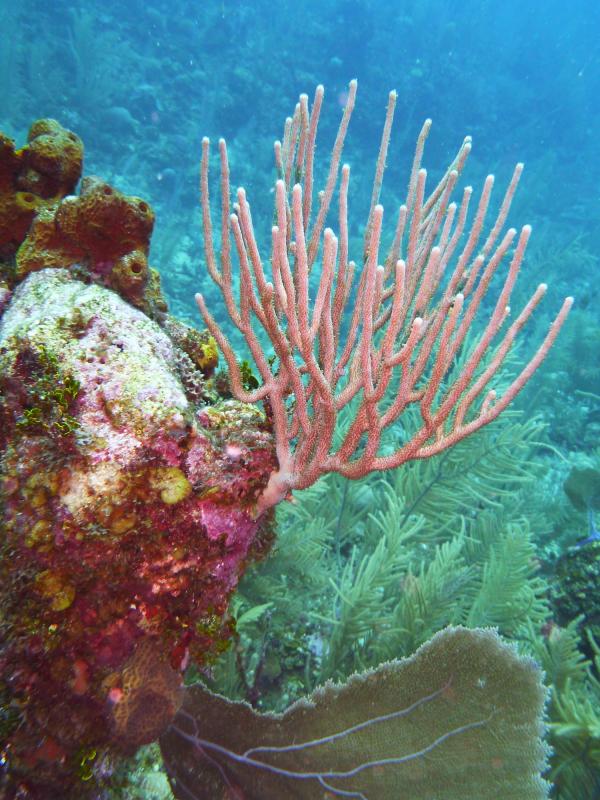 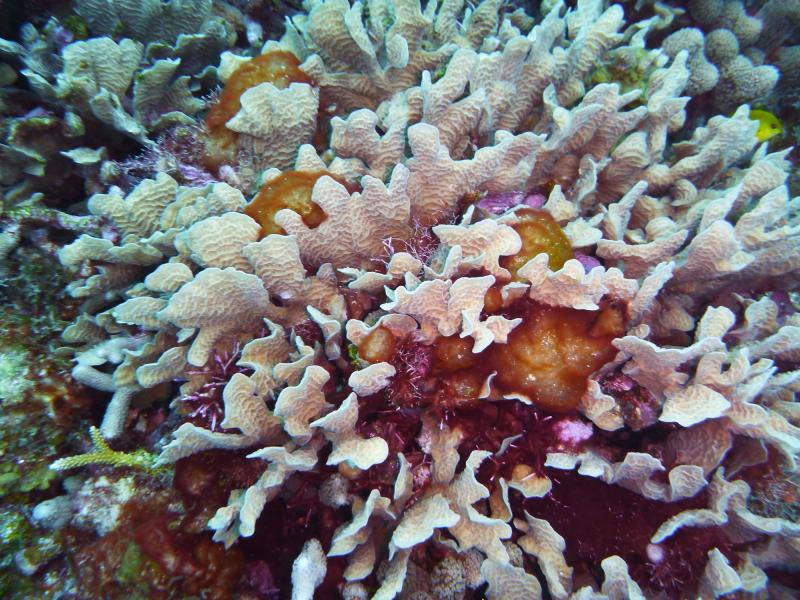 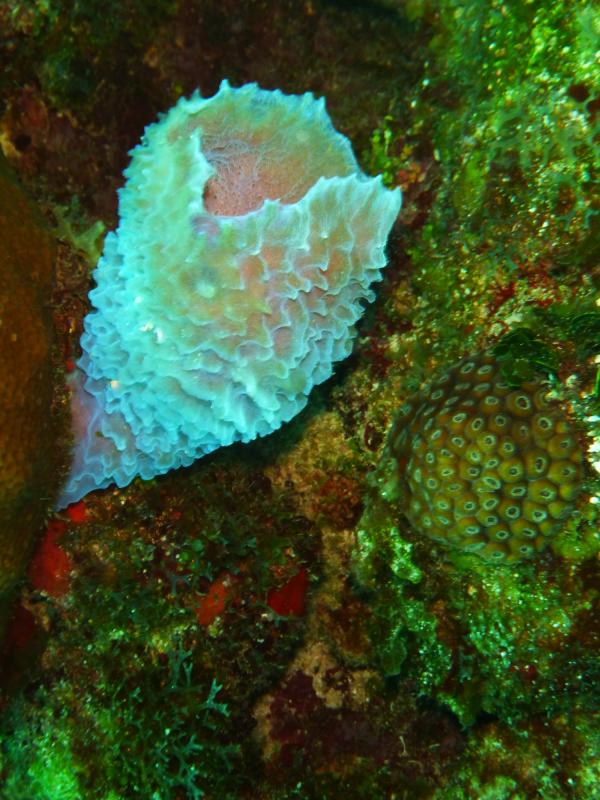 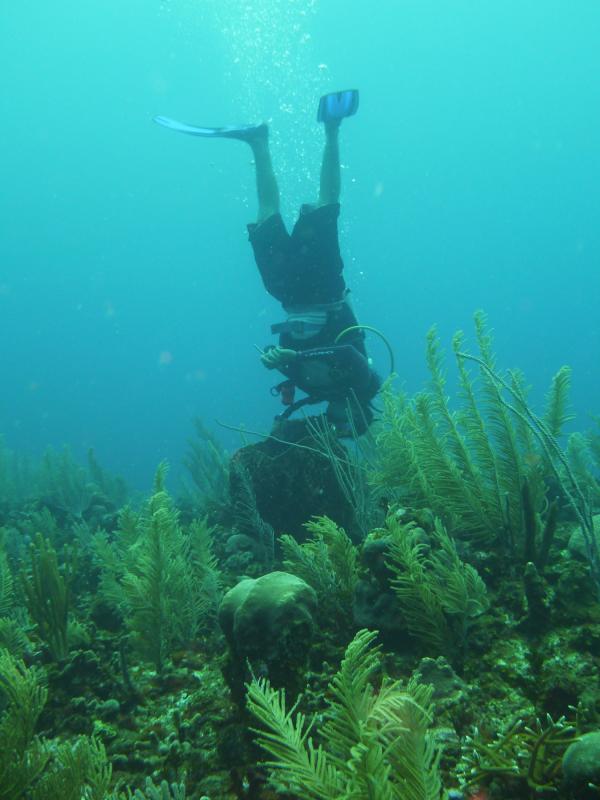 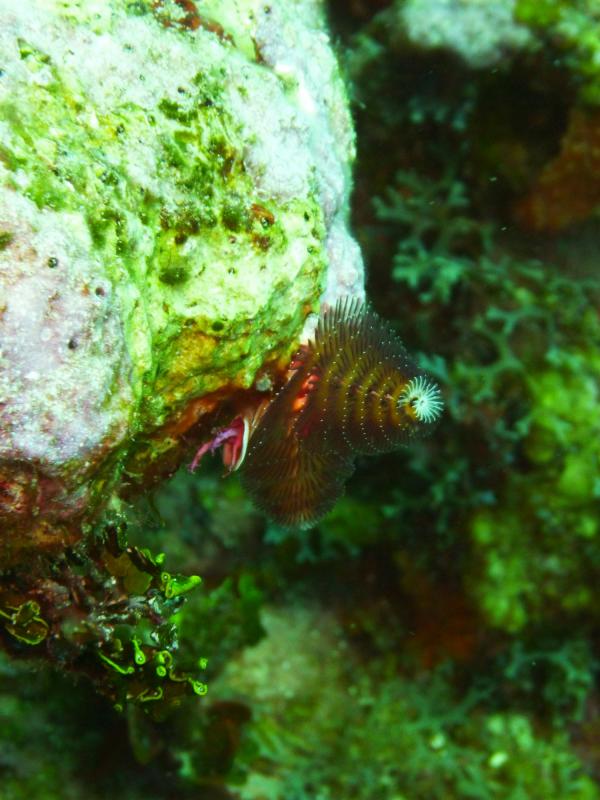 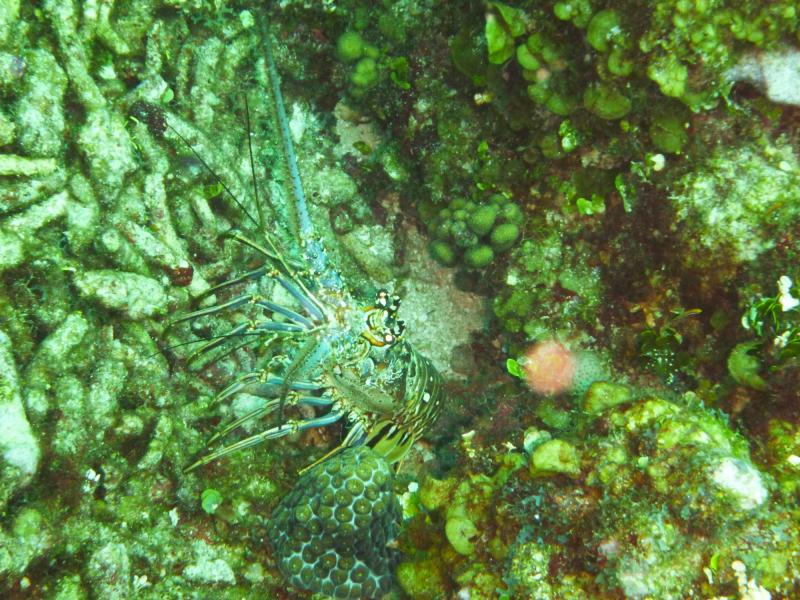 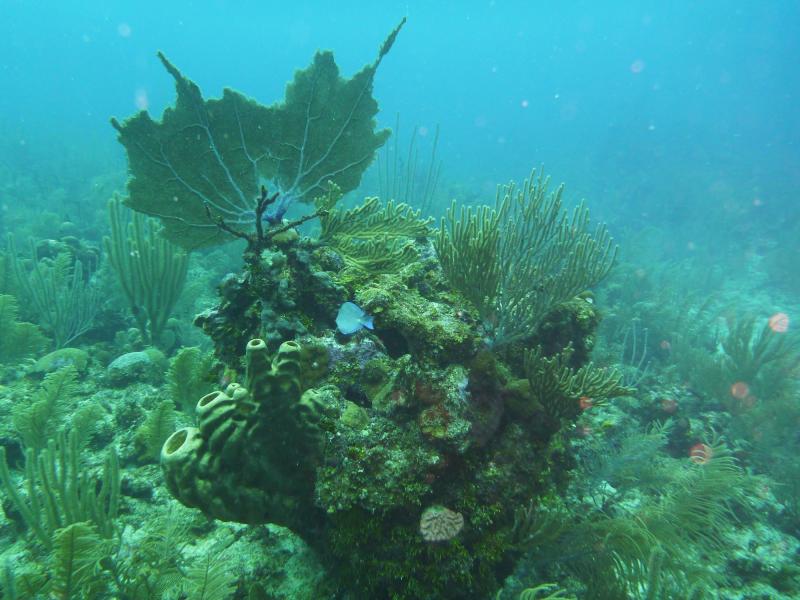 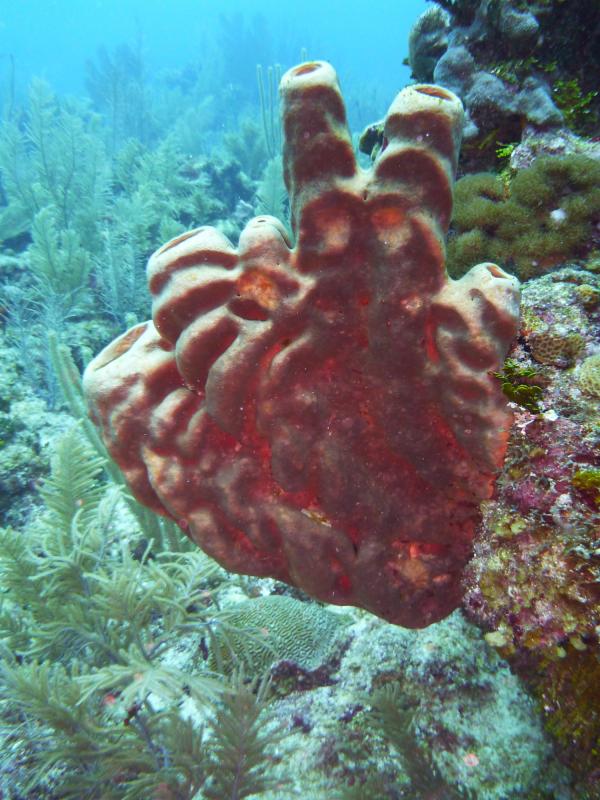 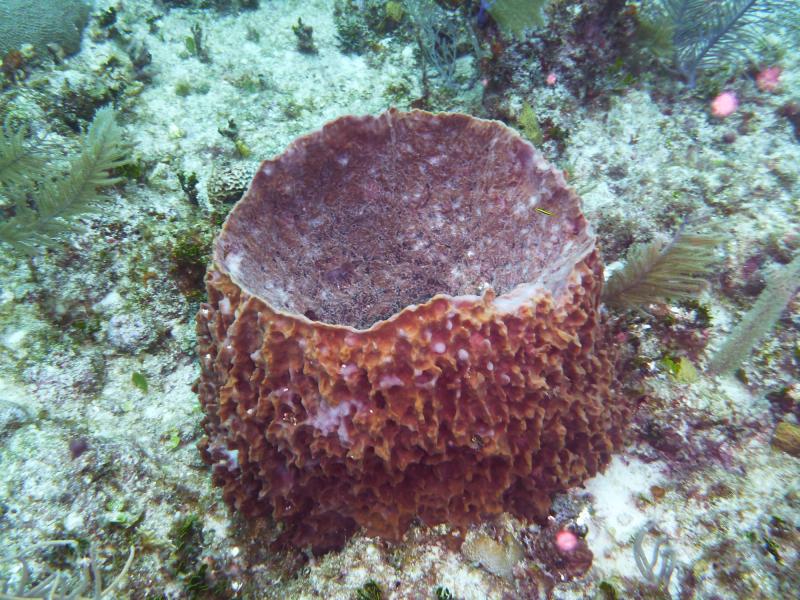